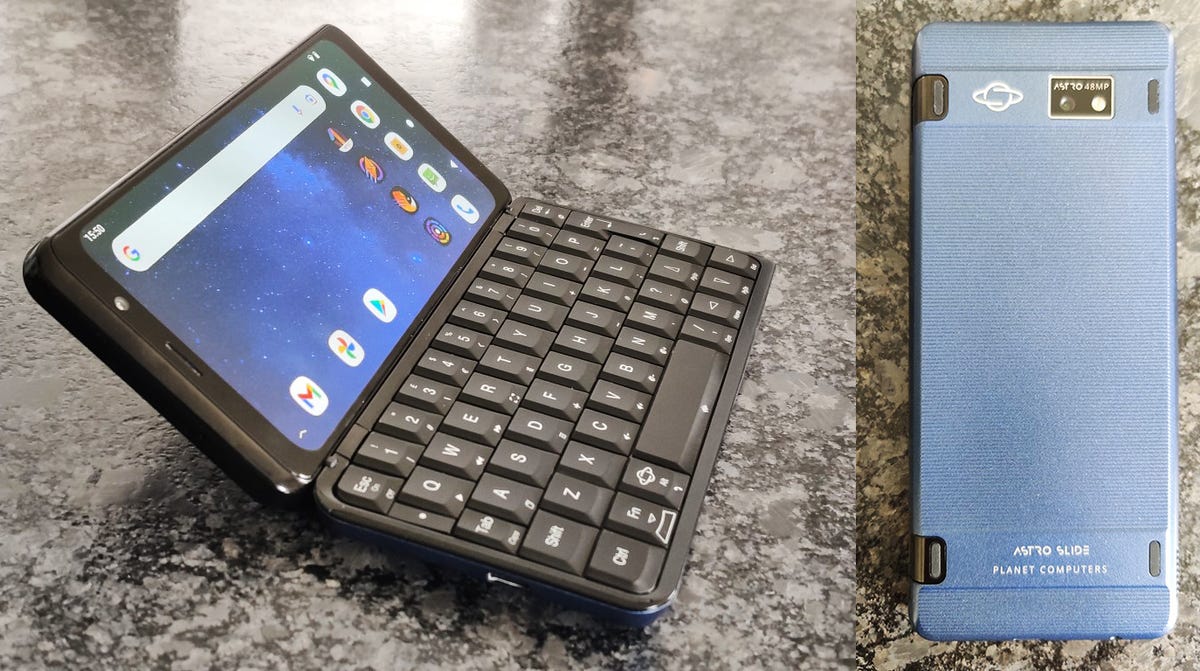 The Psion Series 5 is one of the icons of handheld computing. Indeed, for some people it is the icon. Clamshell in form, with a fantastically usable mini-keyboard, running from AA batteries, with a bespoke Symbian operating system and removable storage, it was way ahead of its time. The Series 5 launched in 1997 and the Series 5mx in 1999. Neither model offered cellular or Wi-Fi connectivity.

There have been various attempts to resurrect the Series 5 for the smartphone era, with UK-based Planet Computers carrying the torch in recent years. Its 2018 Gemini and 2020 Cosmo Communicator both share the Series 5’s clamshell form factor.

The new Astro Slide 5G does things a little differently. It still offers a laptop-like experience, but uses a sliding rather than a clamshell mechanism to raise the screen from the QWERTY keyboard. With Android 11, bespoke apps, 5G support and a core of mainstay smartphone features, will the $889/£711/€855 Astro Slide spark a revival of the keyboard-equipped handset? 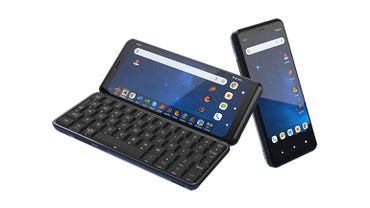 The Astro Slide 5G has a regular handset footprint of 172.4mm by 76.5mm, but it’s a chunky 18.7mm thick and weighs a hefty 325g. It’s obviously made of two separate sections, with a deep blue base and a black top. This construction undoubtedly explains why the specifications make no mention of an IP rating for dust and water resistance.

The two sections share the ports and connectors between them. One of the base’s long edges has a pair of speaker grilles, a volume rocker and a configurable button supporting long-press, short-press and double-press actions. One of the base’s short edges has a 3.5mm headphone jack, and there’s a USB-C port at each end.

Putting USB-C and headphone connectors on the bottom section makes perfect sense. That way, when the screen is tilted up for keyboard use, the connectors sit flat on a desk rather than being elevated in mid-air, as they would if located on the screen section. That upper section houses the SIM slot and power button on one long edge, the latter incorporating a fingerprint reader.

Meanwhile on the underside there’s a single 48MP camera that’s flush to the backplate rather than sitting in a protruding lozenge. The presence of just the one rear camera is a clear indication that photography is not the Astro Slide 5G’s strong suit.

Planet’s last outing, the Cosmo Communicator, dealt with the need to present alerts and other information on the outside of the device by embedding a small display in the clamshell system’s lid. This time around the slide-and-tilt screen mechanism means the screen is permanently visible, as on a standard phone. This means the screen is not protected by being inside the clam: it’s designated as ‘scratch resistant’ and is protected by Gorilla Glass 3, some way behind the leading-edge Gorilla Glass Victus.

The 6.39-inch AMOLED screen offers FHD+ resolution (2,340 x 1,080 pixels, 403ppi). I found the resolution fine, detecting no issues with images, video or text. What does rankle a bit, though, is the size of the bezels on the short edges. I measured these at 8mm to the edge of the screen plate itself and a full 12mm to the edge of the device. In these days of minimal-bezel devices, this is very noticeable. The bezels do provide plenty of room for the selfie camera to sit outside the screen area rather than being embedded within it.

Accessing the keyboard requires two separate movements, and there is a definite art to it. First, the screen and keyboard sections need to be pushed apart. This is achieved by holding the Astro Slide 5G’s left and right edges in both hands and gently pushing with the thumbs. Most of the motion is smooth, but there’s a little resistance towards the end, because this also pushes a pair of hinges proud of the base section. If you’re holding too much of the base, your fingers will prevent the hinges from pushing out.

The second movement is to push the screen upwards from its back edge so that it tilts at an angle and comes to rest in the two hinges, laptop style. Once you’ve done this a couple of times, the combination of fingers and thumbs for the push and tilt motions becomes intuitive, fast and fluid. But at that point four-fifths through the push movement, just before the hinges deploy, the upper and lower sections feel like they’re about to part company — although they are, in fact, very secure.

I found closing down to be more of a two-stage process, even after doing it many times. Releasing the hinges and then sliding the two sections together required a change of hand position, and I never did find a consistently quick and comfortable method.

Using the touch-screen in laptop mode can be a little frustrating, as prods and sweeps almost anywhere except about a centimetre from the join to the base cause the device to lurch backwards if you’re not careful. It was fine once I’d developed a light-touch approach, but some users might find that a challenge.

The backlit keyboard is the Astro Slide 5G’s raison d’être. With large, physical keys that emit a definite ‘clack’ when pressed, it is a perfect homage to the keyboard on the original Psion Series 5. As on that device, there are many shortcut key combinations, and it’ll take a bit of time to learn them and make the most of them. I found typing comfortable, and with a little retraining of the spread of my fingers, was just about able to touch-type.

SEE: The best Android phones: Better than the iPhone?

However, even though my hands are relatively small, I had to slow down to type accurately. Speed was somewhere between what I achieve on my usual keyboard and what I get out of a typical smartphone’s on-screen keyboard. The hand position is such that I would not want to rely on this keyboard for extended periods, and in any case the screen is far too small for serious productivity. But it was extremely useful for random slices of time when I didn’t have my laptop to hand, allowing me to rough out ideas and draft sections of text for later editing. These are tasks that I find awkward using a phone’s on-screen keyboard, and they were much easier to achieve here.

The Astro Slide 5G runs on the MediaTek Dimensity 800 chipset with 8GB of RAM. This isn’t a leading-edge SoC, and the benchmarks I recorded bear that out. Geekbench 5 returned average CPU scores of 501 (single core) and 2215 (multi core). The last two handsets I reviewed with scores around this mark were the Poco X4 Pro, which runs on a Snapdragon 695 (693 and 2044), and the OnePlus Nord CE 2, running on a MediaTek Dimensity 900 (719 and 2143). Flagship-class smartphones are currently scoring around 1000 (single core) and 3500 (multi core).

There is 128GB of internal storage, of which 11GB was used out of the box, leaving 117GB free. The SIM slot accommodates a MicroSD card as well as two SIMs, so you can add external storage if needed. The handset also supports an eSIM.

The Astro Slide 5G runs on Android 11, so it’s slightly behind the times, but this is compensated for by a bespoke software suite that pays homage to the apps that came with Psion’s Symbian/EPOC operating system. There is a calendar, which will pick up content from Google or Microsoft Exchange, an excellent notes app, and an email app (although you can also use Gmail).

A small App Bar, which pops up at the bottom of the screen when you hit the Planet key to the left of the space bar, offers these applications alongside other key app shortcuts. It’s easy to configure what appears here, and of course you also get the usual Android app-management services. There’s also a unified search system, OneSearch, that will look both online and on-device for matches to search terms.

There are just two cameras. The selfie camera shoots 13MP images, while, as noted earlier, there’s just a single rear camera — a 48MP unit based on a Sony sensor. Point-and-shoot photos were acceptable, but the camera software is convoluted.

For example, to access settings for the self-timer, a scene mode (of which there are many), white balance, image size and other things, requires hitting an on-screen icon and then the tool icon, rather than simply having a pro mode or settings button available while you’re framing an image. Moreover, switching HDR on disables access to several settings. These accessibility issues may be fixed in a software update. Let’s hope so.

The 4000mAh battery kept the Astro Slide 5G going for 15 hours and 53 minutes under the PCMark for Android Work 3.0 battery life test. That’s pretty good going, and in the upper quadrant of results I achieve under that test. However, playing a YouTube video for three hours from a full charge drained 27% from the battery, which extrapolates to just over 11 hours.

I always let screen brightness set automatically for these battery life tests, and for some reason the screen wanted to be at 100% during video playback, which could well be the reason for the higher battery drain. Brightness could easily have gone down by about a third. Maybe this is another issue that a software fix could rectify.

The Astro Slide 5G is bulky and heavy for a smartphone thanks to its signature physical keyboard, whose slide-and-tilt access mechanism is a little awkward to get to grips with. However, Planet Computers’ companion apps are compelling, and reminiscent of the inspiration for this handset — the late-1990s Psion Series 5.

While the Astro Slide 5G doesn’t have much direct competition, there are rival setups, including Bluetooth keyboards for phones and any number of tablet/keyboard combos. The latter are bigger and heavier to carry, but better suited to longer bouts of typing.

With the Astro Slide, Planet Computers has successfully updated the Psion Series 5 concept for the 5G era. If you need a phone with a physical keyboard it’ll serve you well, but it’s unlikely to trouble the mainstream.

With the demise of BlackBerry phones, handsets with physical keyboards are thin on the ground. Unihertz offers the BlackBerry-like Titan and Titan Pocket, while Linux fans will be interested in the upcoming F(x)tec Pro1 X.

This 5G smartphone comes with Android, Linux – and a keyboard. Back to the future with the Astro Slide

With Astro Slide, Planet Computers goes all in on smartphones with sliding hinge and 5G